On Courland's shore - in the village grown in between the lake and the sea daily life flows as usual. Farmer's son, Lokis, has fallen in love with local girl Mare. Yet the energetic and passionate Mare does not fancy the calm and even-tempered Lokis.
In the vicinity of the Baltic Sea Vikings are plundering. Two brothers Thorolf and Egill Skallagrimsons together with other men plunder and ravage. When they come to Courland, first of all they sign a ceasefire and trade agreement, but when the agreement expires, the Vikings start to rob. The invaders find a settlement and plunder it. In the evening Thorolf sees that his brother Egill and his men have not returned yet.
Meanwhil Egill meets Mare on the fringe of a forest and falls in love with her. However, back in Iceland Egill's beloved Sigrid longs for him. Not being able to wait any longer and being afraid for the beloved Egill's life she turns to the Almighty God Odin. Egill with his allies raid Lokis's farm, plunder his house, but all of a sudden they are surrounded by the Couronians. They capture the Vikings, attacking with swords, darts and battle-axes and lock the Vikings up in a basement floor of a grainary. The Couronians decide to kill the Vikings at dawn next day; but now they leave to feast. Mare is trying to tell her fortune from the signs on the sea shore and dreams about Egill. Lokis tries to persuade Mare to stay in Courland.
Meanwhile in the Nothland Sigrid begs Odin to protect her beloved one in upcomig fights. Odin sends Valkyries to turn the course of the adventure. Egill and his all allies manage to free themselves. Whil Couronians are feasting, Egill with his men leave secretly. However, in the forest Egill recalls for warrior honour and insists that Vikings should not be steeling without letting others know it. He calls his men to return to the Couronians' yard.
Egill meets Mare on the way and promises to take her with him when he has finished one more task. He leaves Mare and returns to the yard. Couronians feasting, Egill sets their house on fire. House is already in flames when the Couronians notice it. Egill kills most of the Couronians and both with Mare they board the boat with Thorolf and other Vikings. At the dawn they leave the coast of Courland.
Aktuāli saistoši 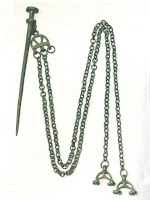